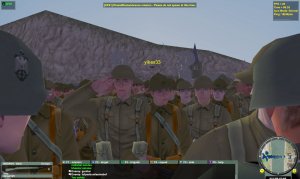 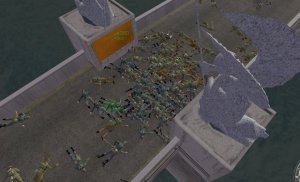 These names can also be found on the plaque at every town’s City flag, the one with the sheep on it.

Those two pics summarize this game.

First 600 people attending a virtual ceremony. Allthough a couple of grenades were thrown, I think it was impressive.

Then after the ceremony we end in one big gunfight, it still is a game after all.

S! to all that were there.

I was there, it was well done. As always, a few boobs showed up, but overall it was nice.

Of course, on the way in to work the obvious struck me (as it tends to when you actually have a half hour to think about something) that I could have just told the host not forward fire messages when arenalock disabled kills – rather than trying to design a complex way to prevent the client firing…

Well, at least that’s something you can probably knock out fairly quickly for the next host update. BTW, been playing a lot lately (my son too) and we are having a blast. So much so, I brought back my friend redleg69 into the game.

Very moving. I’m quite sorry to have missed it.

on another note – there is a buzzard with a playername displayed. Don’t know if you want that as the download… :)

Minor request: Can you update the link to Gophur’s blog? He’s changed the address to http://gophurhole.playnet.com/ and because i’m using several browsers/operating systems I find it easiest to get to his blog from here. Thanks.