A long time ago, in a Grimsby far, far away, a young kid saves up enough money to buy a C compiler for his Atari ST. So the transition to Microsoft C was pretty natural for me. I’ve owned personal copies of each version of MSVC since C/C++ 7 in 1992, I still have my boxed VC6.

Based on my experience with the VS 2012 developer preview, beta and release candidate … Microsoft have killed everything in VS that made me choose to fire it up over Code::Blocks or KDE or VIM.

Yep – the problem is cosmetic. What 2012 does is fantastic, but in their attempt to de-clutter the visual workspace, they’ve made looking at the workspace unpleasant.

One of the design aims of this UI restructure was to remove GUI chrome and simultaneously aiming for as few colors as possible. So now there is not only an absence of ‘chrome’ (borders, lines, etc) to show you things like where one tab ends and the next begins, the tabs happen to have the same color as the background:

On the right – those are tabs, those things that look like text labels over the arbitrary background color…

Also, see how in various places they’ve not just removed the “chrome”, they’ve replaced it with … text, i.e. colons. 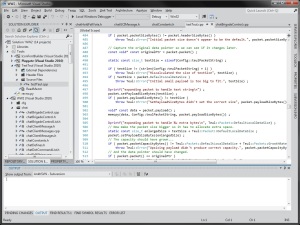 Normally, when a new VS comes out, I’m all over it, and start using it immediately. I’ve barely used any of my 2012 installs, consistently, significantly preferring to work in 2010 and only load 2012 when I wanted to try out compiling.

Everything about 2012 is better – except the UI, and the UI crosses some kind of line for me.

Visual Studio is one of my all-time favorite software products, evah. But I’d rather use VS6 (and I gave it a run before posting this to confirm this) than use 2012’s RC IDE.

Meanwhile, 2012 earns itself the satan’s sphincter tag… For the IDE and for a lack of a good update on what C++11 features it supports.

I couldn’t agree with you more..

I’ve just lost an hour on finding how to switch the chrome back to vs2010/2008 style. Nope, no option. I cannot fanthom what stylists the MS hires. I understand that the METRO style is the last brandmark that MS has left for uneducated computer end users and but for the last chips of sanity, DEVELOPERS does not fall into that category. Developers really like to have their environment STABLE. I actually HATE and DESPISE the METRO style. Almost every appliance of it makes the application – yes, indeed, more spatious and looking stylish – but also renders it unreadable, hard to operate by mouse+keyboard tandem, and simply unusable for anyone who wants to perform something quickly and quickly decipher the results form screen.. Applying that to a development environment, I do not understand. Currently, each time I have to VISUALLY SEARCH for the proper tab or the right menu. This is just not right..

I have this hunch:

Microsoft proto-typed a Ribbon UI version of Visual Studio, and the MS developers hated it but were stuck having to use it. So when the Metro prototypes come along, it’s a HUGE relief.

I can’t think of any other reason that they would have so grievously bastardised the VS UI without a major staff exodus.

All these screenshots are prerelease. Try the final version and, if you like, install the theme editor and switch the colors back to 2010.

@shanselman “All these screenshots are prerelease”

Do you understand what a “Developer Preview” is? Are you aware that I’m a developer? If it had been easier to provide feedback to MS at the time I posted, I’d have used their forums. But as it happens, I’ve praised/discussed Visual Studio for years and if you dig thru the archives, you’ll find several of my posts have Visual Studio devs comment on them, and I frequently get emails from VS devs in response to my commentary on the product.

“install the theme editor and switch the colors back to 2010”

It isn’t just a matter of the colors, it’s a matter of changing the UI presentation in a fashion that is inconsistent with pretty much anything else in the ecosystem. If you want to accuse me of being a whiny change-fearer, you are welcome to brandish your ignorance. Yes, the internet is full of people who had a knee-jerk reaction to ’12s UI. I’m not one of them, and I have a track record to back it, on this very here part of the internet.

I’m not calling for a boycott of Visual Studio, I’m not asking Microsoft to fire Mr Ballmer or any of the noddy things that people like to do when a couple of menus are reversed. I’m not even saying “I quit! Never using VS again!”

I consider my wording to be fairly specific: “sitting this one out”. I have every confidence we’ll see ’13 have an option for an old-school UI. I’m willing to broach that I’m perhaps just too long in the tooth using past VS editions to handle this transition, although I don’t think that is consistent with my nature – but people change as they get older.

For certain, I’ve been using online communications since 1983 so there is no way I can accommodate all-caps text as anything other than shouting.

Agree with your assessment entirely. The VS2012 UI is just butt-ugly and hard to watch. I can’t fathom who championed this.

This is what happens when you replace real engineers with right-brained posers. They become hell-bent on trying to make engineering tools kinder-and-gentler, and screw up everything in the process.

No worries. The path that Microsoft is on is not sustainable. it’s one thing to sell the Kool-Aid to others. After all, Microsoft makes quite a bit of money from the labyrinth of a mess with “Everything-Is-Gentle-And-Fluffy” mentality. Developer customers spend inordinate amounts of time trying to undo the crap that they created, and all that time ultimately results in dollars for Microsoft training, tools (that fix what should not have been broken), redundant products, momentum, etc.

But when Microsoft starts drinking its *own* Kool-Aid, watch out. All of a sudden, the numerous problems that Microsoft created for third-party developers suddenly become their own. All of a sudden, a manager at Microsoft finds himself in a room, with eight “engineers”, who spend weeks talking about something as ridiculous as the colors of an IDE interface, when they should not be mucking with in int the first place. Throw in the fact that said engineers are all topping $100,000/US a year, and there you have it: a recipe for a slow, painful, inevitable death – inevitable because posers are often very shrewd at protecting their job security with serendipitous tactics.

I just did a survey of VS2012, and all the problems with it. Microsoft: You are in trouble. :(

This post hits the nail right on the head. Not only is the new UI a huge step backward from VS2010, which I loved, but it actually has usability issues. As you mentioned, there are no longer visual cues to delineate tabs, and also to indicate which part of the top of the window can be clicked to drag a window around. Also removing the colors and changing the icons to boring, colorless versions was lame. This is a stupid, pointless change, and I’m happy to see that I’m not the only one who hates the direction the UI for these apps is moving. In a word, it sucks.