6 weeks with SVN, 500 revisions. Actually, if you deduct “structural” revisions and revisions in branches it trims down to 422 revisions. The cool part is that little window in the bottom right of the screen. If you’re about to break code on a new project and you are thinking about adding automated builds/tests … do not do it later. Every character of code is an extra ounce of pain when you “get round to it”. 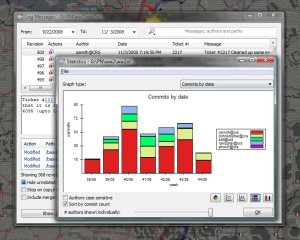 And so it came to pass…

I really didn’t think this would happen so quickly. When you’ve been fitting spits and spots of systems together over 6 years towards a goal, you build up an overly active awareness of how much is involved. You’re overly inclined to fill in variables. I knew that the host was easy enough to build, and I’d scripted the mac build for Gophur, so I knew that wasn’t hairy. Recently I’d come to know that now the client and host source is all in one repository I can match source revisions. But, when I tried to put it all together, along with scripting it under Windows … Pop. I think my head just exploded, is that my amygdala on your lapel?