Q: When is a desktop not a netbook?

For some time now, you’ve seen me turning into a Ubuntu loverboy. Mark this post as my officially running for the exit with only a brief stop to grab an industrial strength barf bag.

Ubuntu 11.0, “Natty Narwhal”, is in Alpha. I’ve given it a short spin, done a little reading to check on my initial conclusions.

Don’t misunderstand: It’s perhaps the best Ubuntu yet. But you come near one of my workstations with it and I’m not going to think twice about smashing you in the head with my monitor.

END_OF_DOCUMENT_TOKEN_TO_BE_REPLACED

… printing from all my Windows boxes and my Linux VMs without problems. Finally.

But I don’t HAVE a printer…

Why do so many Linux operating systems have cups and other printing services as a high level dependency? It may be trivial, but it’s one more attack vector and one more set of running tasks… 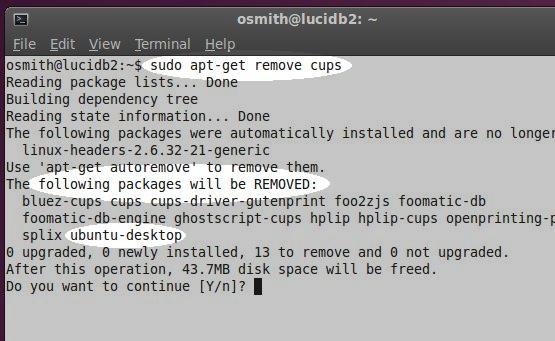 Ever been curious about Linux but figured it as too much hassle? Or got as far as looking at screenshots and fell about laughing?

Don’t be scared of giving Ubuntu a try, the Lucid Lynx proactively likes to strut its stuff…

If you download and burn the CD installer, it will default to booting up in “Live CD” mode. About a minute after booting the CD, you’ll have an all-features Linux Desktop running on your system without touching your hard disk. Remove the CD and reboot, and all traces of it are gone.

Any files you download/internet history/changes you make are held in RAM only, so once you reboot, they’re gone. You can mount your Windows disks if you want; or you can access a USB drive if you want to save stuff permanently.

Ubuntu has an (optional) Windows-based installer called Wubi. The really great thing about trying Ubuntu this way is that — should you decide it’s not for you … Just boot back into Windows and use Add/Remove Programs to uninstall it!

Several Virtualization platforms, including VMware (free VMware Player), Parallels and Sun’s (free) Virtual Box are Ubuntu-smart: when they see they you’re booting a new Virtual Machine from a Ubuntu image/CD, they’ll pretty much answer all the installer’s questions for you, install their performance-enhancing tools, and finally present you with a sweet operating system in a box.

In my quest to get a decent dual-OS box (without dual booting), I gave the free VMware server a spin instead of Workstation. The experiment was short lived and lead me back to Workstation with a slightly different approach, and I’m pretty pleased with the resulting Ubuntu virtual machine.

END_OF_DOCUMENT_TOKEN_TO_BE_REPLACED

In my previous post about running Ubuntu Lucid Lynx (10.4b1) I mentioned my /etc/fstab changes.

Me no likey. I’ve had to reinstall 2x after that because of something going wrong when I rebooted.

Also, putting stuff from /var into a ramdisk had the annoying side-effect of using up all my memory when I did an OS update. So I moved /var to a regular hard disk partition instead. There’s a little slow down when I do upgrades and such, but not really worth wasting that memory.

Boots insanely fast, takes about 1s longer from login to desktop, but I haven’t had to reinstall again since.

Lucid on the SSD with dialogs

Damn. 15 secondish boot time (from power on). Lot of that is the BIOS checking for drives and starting grub! From selecting the OS in grub to the login screen is about 3-4 seconds, and from entering my password to having a usable desktop: about 2 more.

Here’s how (on Ubuntu Lucid):

END_OF_DOCUMENT_TOKEN_TO_BE_REPLACED

Apparently there is a Debian-based Xen LiveCD.

Ubuntu has a convention of naming each release after an animal, alphabetically. 9.04 was “Jaunty Jackalope”, 9.10 was “Karmic Koala” and 10.4 is “Lucid Lynx”.

Let me say first: 10.4 is in beta at this time, with patches and updates rolling out regularly. They’ve gone into feature freeze and are focused on bug fixes at this time.

But off the bat, my comments just a day or two ago about how Ubuntu still looked like a Linux lost a lot of their weight with 10.4. The anonymous gray dialogs, like the “authorize this activity” still need polish, but the desktop itself has begun to look sexy.

END_OF_DOCUMENT_TOKEN_TO_BE_REPLACED

Elated by how easily Ubuntu had installed itself onto a hard disk with the boot loader on the flash drive (so, remove the Flash drive and no sign of the Ubuntu install), I decided to give the new Ubuntu 10.4 beta 1 (64bit) a whirl.

So I unplug the USB drive and reboot

I reran the Ubuntu installer, and this time I went into “Live” mode and applied most of the updates waiting to be installed. Then I installed it normally onto the hard drive, with no USB fiddling. I can live with having to select my OS at boot via Grub, I just wanted to avoid it.

Both Ubuntu and Windows appear to be booting fine after that. Shame :(